Transport Action Ontario issued the following statement on December 18, 2019 regarding the cancellation of the Hamilton LRT project.

Transport Action Ontario is profoundly disappointed with the Ontario government decision to cancel the Hamilton LRT project. Work had been underway on this project for many years, with over $160 million expended by Metrolinx on design and property acquisition, with more than 60 properties acquired and residents relocated. There are many troubling aspects about this decision.

Without completing the RFP process, the province’s figure of $5 billion (including 30 years of operating costs) is even more of a guesstimate that the previous government’s forecast. Other LRT projects in Ontario have come in at a much lower figure than this. The fact that the government will not release the third-party report that generated the $5 billion figure is also very troubling.

A business-friendly environment for investment and job creation requires political stability and long-term infrastructure planning. Businesses have been making investments in Hamilton for several years based on the promised LRT. This is a slap in the face that will also make businesses think twice about planned investments along other promised transit corridors in the GTA. This cancellation contradicts Ontario’s objective of being “open for business”.

It is not clear from the Minister whether all the proven benefits of LRT have been fully considered. Downtown air quality in Hamilton would see significant improvement from the reduction of engine emissions, toxic PM2.5 particulates, brake and tire dust. The negative health effects of these airborne compounds in vehicle traffic-dense areas and their heavy burden on health care costs are alarming the health research community. Higher incidence of respiratory diseases and reduced brain function are, they say, a direct result of poor air quality. LRT in Hamilton would help to alleviate this growing problem.

There is a demonstrated need – economically, socially and environmentally – for the Hamilton LRT. Meanwhile the expert panel that reviewed the widely-opposed 413 GTA-West expressway project found that the need for it could not be adequately demonstrated and that tax dollars invested in transit and road alternatives would do more to reduce congestion. That report has now been deleted from the Ministry of Transportation website, and the $5 billion+ project restarted. The government has thus opened itself up to the perception that it has resurrected a known boondoggle at Hamilton’s expense.

Our affiliate, the Coalition for Algoma Passenger Trains (CAPT) issued the following media release regarding exciting news about the Bear Train.

On Friday, October 4, 2019, Chief Jason Gauthier, Chief of Missanabie Cree First Nation sent to Deputy Minister Michael Keenan a newly completed business plan for the proposed Mask-wa Oo-ta-ban (Cree for Bear Train) passenger service between Sault Ste. Marie and Hearst. This third iteration of the business plan is more thorough, detailed and complete than the previous ones presented to Transport Canada. All of the many stakeholder groups from the Algoma rail corridor as well as several rail experts were consulted and contributed to the final version of the plan.

This detailed business plan will illustrate to Transport Canada that Missanabie Cree First Nation (MCFN) has now completed the requirements to ensure the operation of this essential service.  The other requirements that they had previously successfully accomplished are:

i.       Receipt of a Railway Operating Certificate

The plan indicates how operational funding for the Bear Train from Transport Canada, that decreases over a period of five years, will be an excellent investment in at least three ways. It is a very low-cost way for the Federal Government to achieve a triple win by contributing to its objectives:

i.        Contribute to Reconciliation with Indigenous people

Contribute to Reconciliation with Indigenous people

The Bear Train initiative is an opportunity for the Federal government to help correct the unjust acquisition of land and building of the ACR by ensuring that the passenger train service becomes essential transportation infrastructure for regional economic development of the First Nations through whose traditional territories it passes. It puts the MCFN in the leadership, managerial role for an important regional service that was previously an instrument of their colonization–an essential service for the local Indigenous, Anglophone and Francophone communities.

For Canada to meet the GHG reductions set out by the Paris Accord, Canadians are encouraged to opt for less polluting forms of transportation.  Since there are no roads into this rail corridor float plane travel is the only alternative to passenger rail since the Algoma passenger train service ended in 2015. Much of the environmental tourism market has been lost for the tourism resorts some of which can now only be accessed by float planes—a very polluting form of transportation.

The Mask-wa Oo-ta-ban initiative is an opportunity for the Federal government to help to ensure that the passenger service plays its important role as essential transportation infrastructure for the regional economic development of the First Nations through whose territories its passes as well as for the local Anglophone and Francophone communities.    .

Mask-wa Oo-ta-ban (the Bear Train) is an economic development initiative of the Missanabie Cree First Nation to re-establish the essential passenger service from Sault Ste. Marie to Hearst to support the economic, employment, social and remote access needs of the First Nations, communities, residents, businesses and socio-economic stakeholders of the Algoma passenger train corridor.  The Algoma region is a distressed area for employment and economic opportunity.  The $40-$50 million in economic benefits (BDO, 2014) and the 100s of jobs the passenger train supported directly and indirectly are vital to the Algoma region’s economic sustainability—particularly in the tourism sector.  This employment is particularly needed by the Indigenous people of our region whose rates of unemployment are significantly higher than the rest of the population.

One of the principal forms of economic development that this train supports is tourism—particularly the growing niche markets of Indigenous tourism, eco-green tourism, accessible tourism and Francophone tourism. As Minister of Tourism, Official Languages and La Francophonie Melanie Joly recently stated, “Tourism is an inclusive sector that showcases Canada’s culture, diversity, natural beauty and unique experiences to the world.  It delivers economic benefits across the country by supporting one in ten jobs.”

Over $50 million in annual economic benefits that came from the Algoma passenger train has been lost since the service stopped in 2015. We urge Transport Canada to end this loss by funding the Bear Train for the next five years according to the Bear Train Business Plan plan. 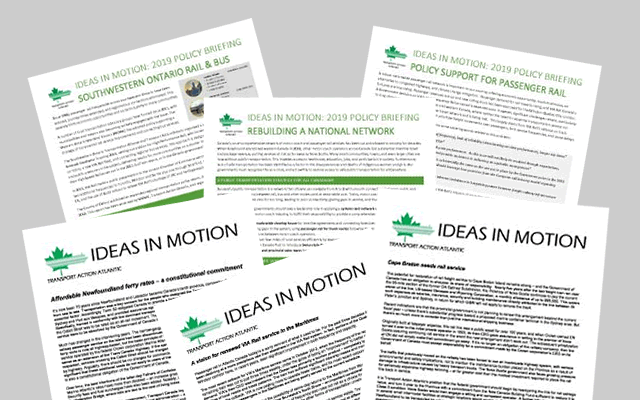 The Transport Action family, under the leadership of the national organization, Transport Action Canada, has issued several one-page policy briefings on critical transportation issues. These have been delivered to all federal parties.

Several of these are very relevant to transportation in Ontario. These are

The briefings can be viewed here: https://www.transportaction.ca/documents/policy-briefings/

Ontario’s Budget 2019 confirmed that the Province is actively exploring opportunities in Southwestern Ontario to enhance passenger train speeds and service levels on existing railway corridors, as well as opportunities for inter-community bus services or other transit solutions that better support the immediate public transportation needs of the region. A transportation plan will be brought forward by fall, 2019.

Transport Action Ontario (TAO) strongly supports this new approach. We have long advocated for High Performance Rail (HPR) – incremental improvement of passenger rail service on existing corridors, plus improved bus feeder service. Various meetings on this topic were held earlier this year by TAO and affiliated organizations with then Transportation Minister Yurek and his staff.

With the appointment of a new Minister, the Hon. Caroline Mulroney, TAO took the opportunity to update her and her staff on our thinking for this upcoming plan. Our letter to the Minister summarized the need for a robust public transportation option, the available technical reports on HPR, the need to include VIA Rail Canada and the Federal Government in the study, and key next steps including specific service scenarios that should be studied.

Our letter to Minister Mulroney can be viewed here:

We also sent the Minister a Policy Briefing prepared by Transport Action Canada on Southwestern Ontario Rail and Bus.

The following announcement was made today, June 25, 2019, by our parent organization, Transport Action Canada.