All Posts by Transport Action Ontario

Niagara Region announced on September 1st. 2022 that it has acquired the historic train stations at St. Catharines and Niagara Falls, along with the surrounding lands, from VIA Rail as part of a significant redevelopment of the two station sites.

This implements a critical piece of the Region’s GO Station Development Strategy and when complete, will see new multi-modal bus-meets-train connections at the two heritage station sites, supporting planned increases of GO train service to Niagara.

The Region committed $40 million as part of its station development strategy back in 2016, and has been advancing numerous enabling projects across the two station sites together with the Cities of St. Catharines and Niagara Falls. Planned investments at both sites were announced on September 1st:

Niagara Region and VIA Rail have been working since 2019 to transfer the St. Catharines and Niagara Falls station to Niagara Region. Niagara Regional council has approved the terms of the station transfer, VIA Rail’s Board of Directors has also approved of the transfer in principle pending approval from Parks Canada for the disposition of a heritage railway station. Upon approval from Parks Canada the two parties are positioned to immediately transfer station ownership.

Bruno Cacciola, Chief Business Transformation Officer for VIA Rail confirmed that the cross-border Amtrak service to Buffalo and New York will continue to serve the two stations: “The transfer of ownership to the Niagara Region of these two stations, pending the usual regulatory process involving a formal approval from Parks Canada, will benefit the community and will give options in order to enhance service to the region. This agreement will also allow VIA Rail to continue offering the Maple Leaf service with our partner, Amtrak, and therefore bring thousands of tourists to the region.”

Masonry repairs should soon be getting underway at the Chatham VIA Rail station, together with other repairs to the stations in Sarnia, London and Brantford.

Speaking in Windsor on August 30, 2022 to announce the government’s intent to appoint an external consultant to study improvements to passenger rail services in SW Ontario, Minister of Transport Omar Alghabra confirmed that part of the $42.8 million of new funding over fours years announced in the spring budget would be allocated to repairs at these stations.

The frost and salt damage to the Chatham station’s brickwork is an issue that Transport Action brought to the attention of VIA Rail in 2019, and sadly the deterioration of the station accelerated significantly in the intervening winters. We have also highlighted the need to renew the flaking paint on the Woodstock station building before that cosmetic damage allows water penetration and costly masonry damage.

Chatham station, built in 1879 and Woodstock, built in 1885, both by the Great Western Railway, are designated heritage stations, as in Sarnia, opened in 1891 by the Grand Trunk together with the inauguration of the first St. Clair River Tunnel. Treasury Board does a disservice to passengers and taxpayers if it does not allow VIA Rail to fully fund station maintenance each year, because maintenance deficits for heritage structures like these grows exponentially if left unaddressed.

Over the past decade, VIA Rail has invested in repairs and upgrades to the London station; carried out an interior refit to provide fully accessible washrooms in Chatham; and undertaken a restoration of the Sarnia station building.

More photos of the maintenance deficit at Chatham station: 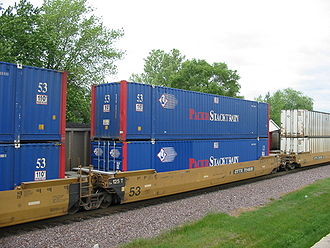 In November, 2021, just after the conclusion of the COP26 conference, Transport Action Ontario wrote to key federal ministers discussing the GHG reduction alternative of truck/train intermodal freight movement versus continued highway expansion and the need for federal involvement (e.g. publicly funded incentives) in what is largely private enterprise.

In late June, we received a lengthy, all-be-it largely generic, reply from Transport Canada. It updated us on the government’s approach to climate action. The Strengthened Climate Plan commits the government to working with rail stakeholders to accelerate technology development and implement commercially-ready solutions. Hopefully “commercially-ready” would include intermodal freight movement.

The Transport Canada letter is pasted below in italics:

Thank you for your email of November 12, 2021, in which you shared with the Minister the views of Transport Action Ontario on the environmental elements that can be taken into account when making decisions related to our transportation system. Particularly, you mentioned the need for an expansion of truck/train intermodal services in the Montréal – Windsor corridor in order to support our climate commitments. My sincere apologies for the delayed reply.

Reducing greenhouse gas (GHG) emissions is a key priority for the Government of Canada. During the Leader’s Summit on Climate Change, hosted by the United States on Earth Day, Canada committed to reducing emissions by 40 to 45% below 2005 levels by 2030 on the road to net-zero in 2050. This is a significant increase in ambition in relation to the previous commitment under the Paris Agreement. Canada has also tabled the Canadian Net-Zero Emissions Accountability Act in the House of Commons, legislating Canada’s goal of net-zero emissions by 2050.

To achieve these ambitious goals, the Government of Canada introduced in December 2020 its Strengthened Climate Plan (SCP), A Healthy Environment and a Healthy Economy. This plan builds on current efforts under the Pan-Canadian Framework on Clean Growth and Climate Change (PCF) to reduce pollution and support a healthier economy and environment through a number of new measures and $15 billion in investments. Building on these investments, Budget 2021 proposed $17.6 billion towards a green recovery to create jobs, build a clean economy, and fight and protect against climate change.

Clean transportation is a crucial part of Canada’s SCP, as the transportation sector accounts for 25% of Canada’s GHG emissions. For that reason, the SCP brought forward the commitment to work with rail stakeholders to accelerate technology development and pilot deployments, as well as supporting the implementation of commercially-ready solutions, among several other initiatives to decarbonize other modes of transportation.

In April of this year, the Government of Canada released its Emission Reduction Plan for 2030, in which we have committed to working with other levels of government, and in collaboration with key federal partners on additional emission reductions from transportation. Your views will support us in considering our next steps in this regard.

In your letter, you mentioned the Highway 413 project and its implications on our transportation infrastructure and its environmental impacts. As a federal authority under the Impact Assessment Act, Transport Canada anticipates participating in the impact assessment process for this project including providing advice and expertise in relation to our mandate.

Thank you for sharing your concern for tackling climate change and providing your views on ways the Government of Canada can continue to work towards reducing GHG emissions from Canada’s transportation system and improving the efficient and effective movement of goods.

On June 15, the Canadian Club of London hosted a one-hour virtual fireside chat between VIA Rail’s acting CEO Martin Landry, and London Mayor Ed Holder.  Transport Action Ontario (TAO) listened in and also submitted questions to be answered later by VIA Rail.  Our colleagues at Rail Advocacy in Lambton also attended.

There were few surprises in Landry’s remarks.  London is VIA’s 4th busiest station and VIA has invested $11M in it since 2019.  London is in a sweet spot for population density and distances.  Other remarks included:

In summary, the chat was a reaffirmation of information already out there and promised.   TAO will continue to vigorously advocate for passenger rail improvements in southwestern Ontario.